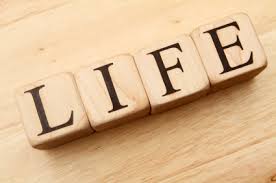 The sigmiod curve how does it apply to life

More important… what is it? 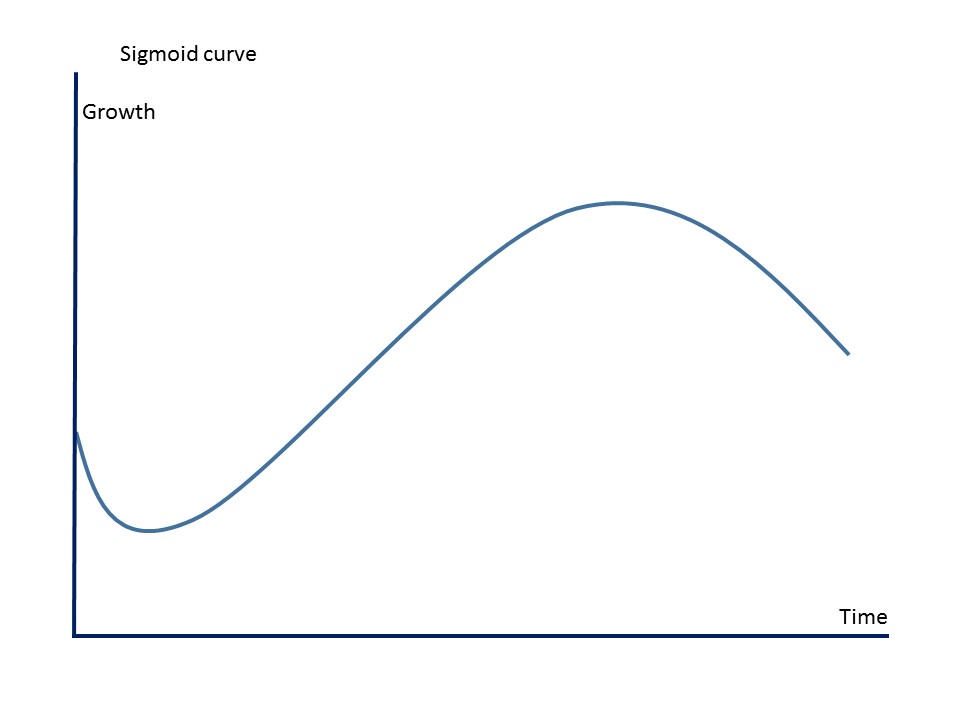 Many years ago, I discovered the ‘Sigmoid curve’ and it has been very useful in describing and managing several specific teams and periods in my life. The Sigmoid curve is a mathematical concept which is basically a stretched out ‘S’ shape lying on its side, and can be thought of as having three sections, each of which corresponds to a phase of growth. 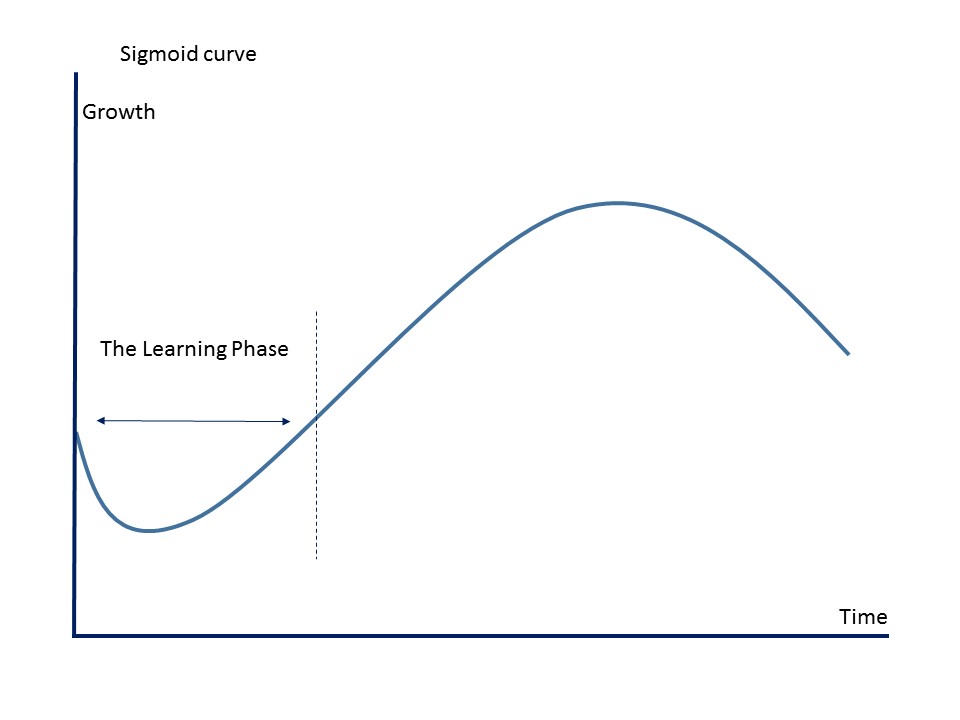 First, at the bottom of the ‘S’ there is a section which rises slowly, often it dips from the start point before rising. This corresponds to an initial period of learning. When someone starts a business or begins a new career (for example), there is a period of hard work, where little seems to get accomplished and basic mistakes are made. Perhaps for several years, those involved work to make contacts, learn the right skills, and develop a plan for success.

This phase can be frustrating because so much effort is being expended with so little apparent result. You could compare it to sowing a crop and tending to the fields – for a long time, there is no sign of growth. But under the surface, something is happening. The seeds are developing, moving and growing.

Lots of businesses, fail in this first phase because it is too hard to keep going with no tangible reward. We tend to be impatient and if we don’t get some immediate reward for our efforts, we decide to move on to something else. But successful businesses and individuals push through this initial phase, keep going and the persistence eventually begins to pay off – we move on to phase two of the Sigmoid curve. 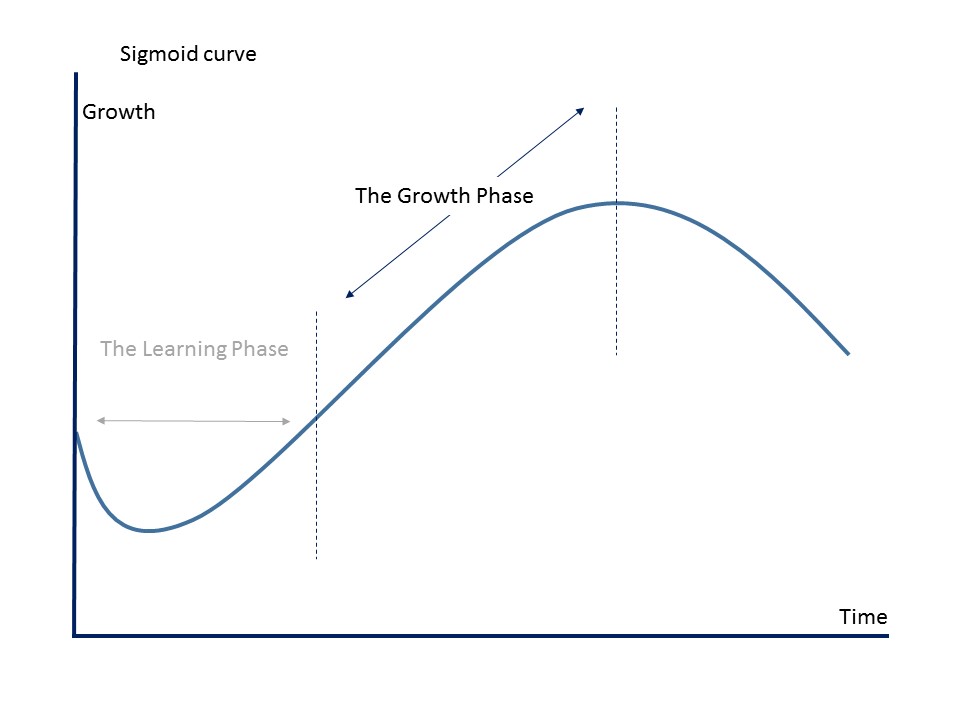 The second section is a sharply rising line in the elongated ‘S’ shape. During this phase, business and careers move ahead quickly. Revenues increase, relationships mature, promotions occur easily, and organizations become much larger. This is where the crop which was sown is growing and coming to maturity, and every day brings perceptible growth and maturation. 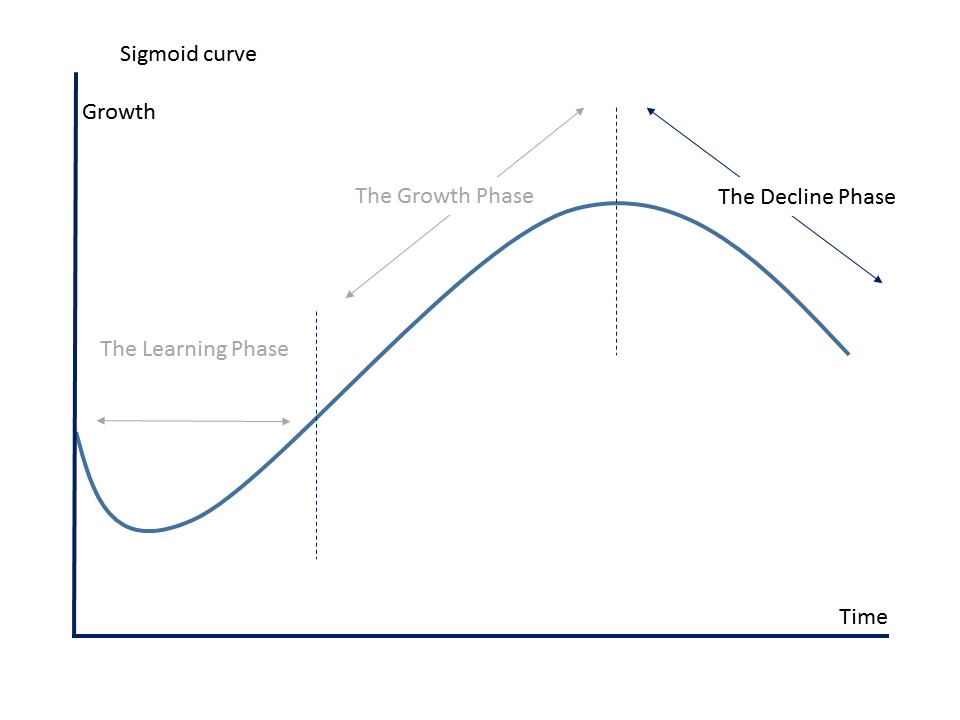 The third phase of the curve is a decline, as the ‘S’ shape starts to fall. The harvest has grown to maturity and starts to die. Morale and energy can dip, revenues decline, people lose touch with the WHY – “The reason we started all this” the empire starts to crumble. On a personal level, your marriage might start to become jaded or you might wonder if you have chosen the right career or question how you are spending your time. 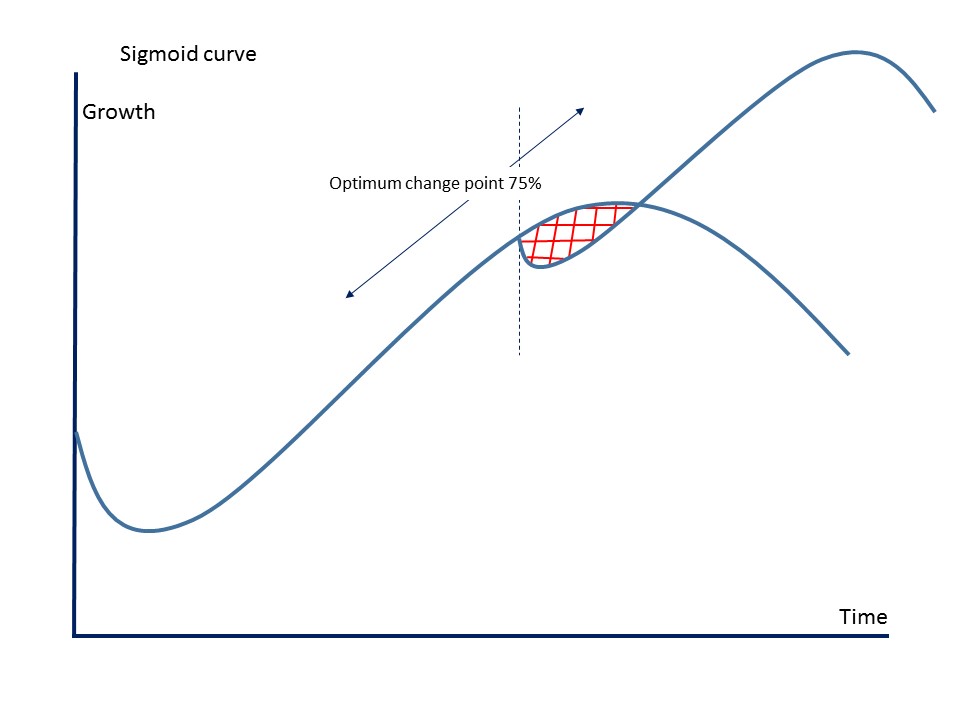 Successful individuals and organizations are self-reflective and constantly monitor their own position on the Sigmoid curve. However, to be truly successful is to go even further – it is to jump off the current curve when it is nearing its peak and start on the bottom of another curve. This can be very hard to do, because just as you are reaping the rewards of your work and application, you find yourself at the bottom of another learning curve. This entails more pain, since growth always involves pain to some degree. It doesn’t appear to make sense to change just as you are doing so well, reaping the rewards of your efforts. There is even, perhaps, a sense of loss – why throw away something which is mature and bringing a reward for something untested and new?

However, the most successful among us know that the alternative is an inevitable decline through phase three of the curve. See Kodak or The Encyclopedia Britannica as examples. Successful people are regularly reinventing themselves, their careers and their relationships, rising to new challenges and pushing through painful new phases of growth. The junction between the first and second is not easy or clean. There is always a period of confusion, where the first curve is being abandoned and the second one embraced. This is a time of overlap, or ambiguity and of confusion.

When can you tell that it’s time to jump off the first curve? This is an impossible question to answer, but the best advice is that it must always be assumed that the first curve is nearing a peak and preparation for the new curve should be underway. It may be that the first curve is longer than was thought, in which case you can keep cruising along until you are indeed nearer to the peak. But preparing for the second curve too early is far better than waiting until it is too late and the decline has set in. If you reach phase three before jumping off, you won’t have the energy and the enthusiasm to make the change so easily and there is less chance of success. 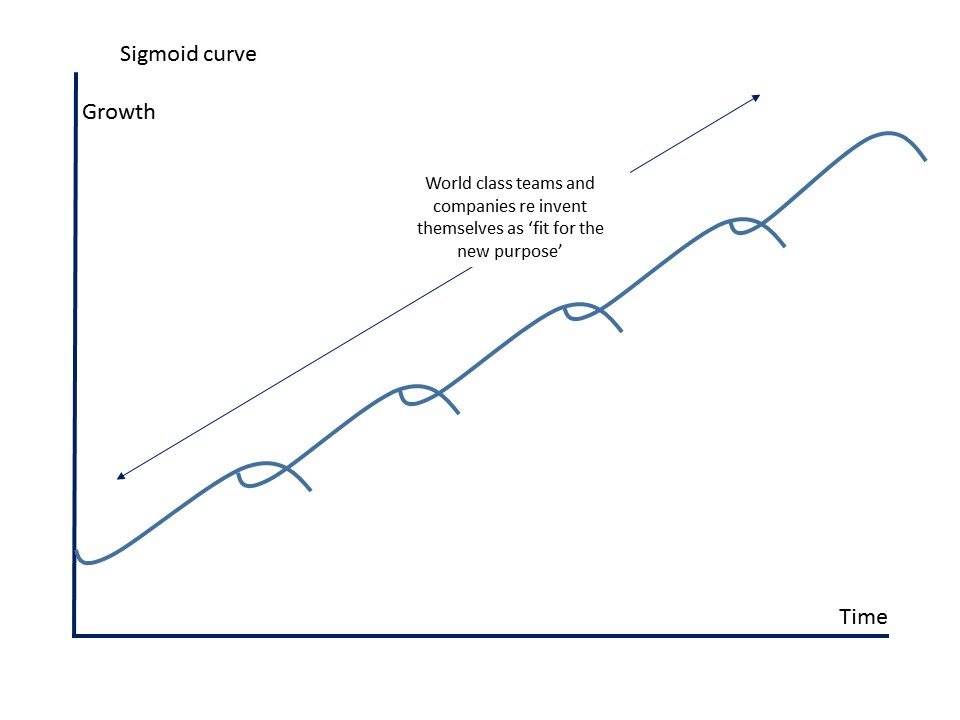 Riding the first curve while cultivating the second is always the best option. Clinging to the first and trying to prolong it is a pointless waste of energy. When all is well and you are at the top of your game, then you know it is time to plan your next iteration.

Here is a video which explains The sigmoid curve  [Link]